Voices from the Field

Hello! We are Nature Saskatchewan’s Habitat Stewardship Assistants for the summer 2022 season, Brynne McMaster and Cory Tufts. The ball got rolling quickly this year, and we’ve already been on what feels like a lot of trips and adventures that we’d love to share about!

After our first few days out in the field being guided by one of our wonderful Coordinators, Rachel, it’s safe to say we learned and saw a lot! We began our trip near Val Marie, SK where we learned how to do range health assessments (RHAs) as well as worked on our grass and plant identification skills. We definitely have a huge appreciation for those who are grass experts after the trip because jeepers, grasses are hard to identify!

We were lucky to be joined by some joyously calling Sprague’s Pipits during our RHA training in the pasture, so our ears are now well trained to pick up on that tell-tale descending call! We also saw some pretty Crocuses, Buffalo Beans, Three Flowered Avens, and some very colourful Moss Phlox.

While we were down at Val Marie we also spent some time working on our bird identification. It was all review for Cory, who is an avid birder, but Brynne was able to learn a lot! We were super lucky to see and hear a few Long-billed Curlews, Loggerhead Shrikes, a Chestnut-collared Longspur, and were even lucky enough to stumble across a Burrowing Owl chasing a Coyote away from its burrow! It was definitely a very successful trip to kick off the summer!

Later in the week we tagged along with the Rare Plant Rescue (RPR) crew to search for Slender Mouse-ear-cress (SMEC) near Abbey, SK. It was a chilly two days and we didn’t find any SMEC, but we did find some other interesting tidbits, like part of a deer skull and antlers. Additionally, we had a few lessons that quickly taught us it’s important to quadruple check for Pincushion Cactus, and then check again, before kneeling in the prairie! Although we didn’t have any luck in our search for SMEC, it was great to spend time with the larger Nature Saskatchewan team and to get an idea of what the RPR crew will be up to this summer!

I’m (Cory) not usually one for beaches. On a previous outing to a beach in Mexico, I was ridiculed for my choice of beachwear, which could be described as business casual (jeans and loafers), so for me to enthusiastically arrive at a beach there must be a truly unique and exciting experience. This past week on the shores of Lake Diefenbaker was exactly that. When we were invited to help the Water Security Agency (WSA) on their annual Piping Plover Census. It was mentioned that this was an area that was very important for these endangered shorebirds, however, I didn’t truly understand how critical this habitat was for them until I heard it being described as “the Toronto of Piping Plovers”. With around 5% of the continental population of this species arriving at this huge expanse of beaches in mid-May to mate and begin raising their young. It really drove the point home just how incredibly important this shoreline is for them and how great of a responsibility we have to give these birds their best chance at raising as many young as possible and to give this species a fighting chance at survival.

On the first day we were told that we were most likely going to hear these amazingly camouflaged birds before we would be able to spot them, so on the truck ride over we were sure to listen to a couple of samples of their calls and I tried my best to burn the sound into my brain. Luckily the first Plover we spotted was very obliging and decided to fly a couple of laps in the air in front of us. The rest of the birds for the week were not so extroverted and studying their “peeps” began to pay off in spades. The ID’ing got slightly easier, but never less exciting.

I didn’t know much about Piping Plovers before but having spent a week watching and learning from the incredibly welcoming and hardworking Piping Plover Crew at the WSA and I am amazed at just how adaptable these birds are and how strong of personalities the individual birds have. It also became apparent how important it is for us as humans to realise what kind of an impact we are having on this species, with one of the primary areas of concern for the decline in their population being nest destruction due to activities such as driving off road vehicles on the beach and allowing off leash dogs to run the beach, and what can be done to help lessen our impact on a species that is already struggling to survive.

While this week was about the birds, it was also about spending a week with some great people at an amazingly beautiful location, and it is absolutely a time that I will look back on fondly for many years to come. I am very grateful for having been able to be a part of this experience and I am incredibly excited for the weeks to come. There was also time for the main attraction, which was talked about almost as much as the plovers, leading up to the trip and that was Josie, the resident donkey at Coyote Springs Campground. I am sure she doesn’t understand why some of her attention was incorrectly being diverted towards some birds :) 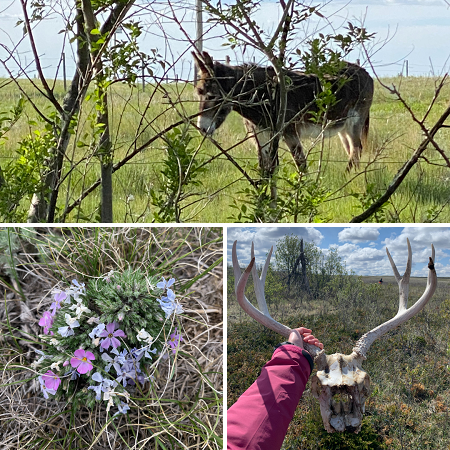