Howdy, we are back from our 10 day grid road search of south western Saskatchewan and are ready to write about what we’ve been up to! It was an awesome trip where we were able to meet with plenty of friendly landowners who were eager to talk to us about conservation and to help keep an eye out for many of the birds (and other species) that we like to keep an eye out for..

Our first full day surveying in southern Saskatchewan started off with a bang. After moseying our way past crops for the first half of the morning, we finally found ourselves sandwiched between two nice sections of native prairie. We immediately began spotting tons of interesting birds and wildlife. The hawks were abundant, and just as we were about to pull away after identifying one as a Ferruginous Hawk (yay!), a bird on a fence post caught my attention in one of the car mirrors. Not believing what our eyes were seeing, we slowly reversed, and to our delight confirmed that we were looking at a Burrowing Owl! We quickly realized that there was a second owl further back in the field and crept along the road to get a better look. As we moved forward, we began to see behind a small hill close to the road and four little heads came into view: Burrowing Owl chicks! We stopped long enough to snap a slightly blurry picture, then went on our way to leave the little owl family alone. It was the best possible way to start off our 10 days on the road! 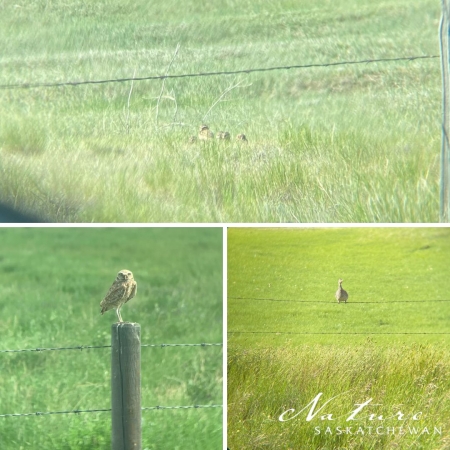 On the second day of the trip we experienced a good ol’ prairie thunderstorm which was pretty impressive to watch. Luckily the hail was kept to a minimum. The colour of the sky afterwards was also incredibly picturesque. At our campsite at Eastend a noisy pair of Merlins were keeping a watchful eye on many of the visitors to the sites. Nighthawks were also flying overhead, doing their best to keep our campsite as mosquito free as possible. Eastend is also home to the T-rex Museum and, while I’m not much one for puns, the one on the town’s sign for the museum was good enough that I had to get a picture.

Our days were kept pretty full, with plenty of birds and other animals to keep an eye out for on our drives, especially gophers. The amount of gophers that we saw running across every road we drove on made it clear that we could use all the help we can get from birds of prey like the Ferruginous hawk. We talked to many landowners who said that once they had some hawks move in, the gophers would move out!  On one corner, we were stopped in our tracks as we came upon some sort of meeting with five Godwits in a field. We quickly snapped a picture and let them continue on, although they didn’t seem to be bothered by our intrusion too much. On our way back into town one day we were escorted out of the area by a vigilant Sharp-tailed Grouse. It was perched on some barbed wire and clucking at us, keeping a watchful eye while we drove away.

After our Burrowing Owl encounter on our first day of surveying I didn’t think our luck could get any better, but lo and behold, on the morning of our last full day on the road we stumbled across yet another Burrowing Owl. This time we got a great view of the sun-bleached male standing on a fence post, and a good look at the darker female back at the burrow. While we didn’t see any chicks this time we couldn’t complain, the Burrowing Owl sightings were the perfect bookends to our long adventure out on the roads!

Through our time spent around rural southwest Saskatchewan, it really drove home the importance of conserving the few islands of native prairie that remain throughout the province. The areas we drove past that were being well taken care of by the landowners were absolutely teeming with a wide diversity of life and it was an important reminder of how critical these areas are. 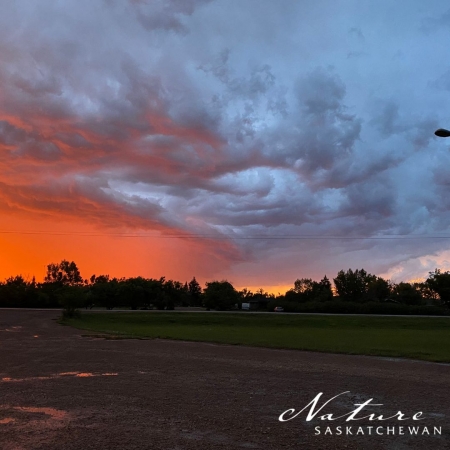