Turkey Vultures normally nest in dark caves along rivers and lakeshores. These are in very limited supply. In the past twenty years, but especially the last five years, these vultures have learned to nest in a different kind of cave, the dark corners (such as previous clothes closets) in attics of deserted farmhouses. This new habit has extended their range, and they have increased in numbers. We wished to learn more. 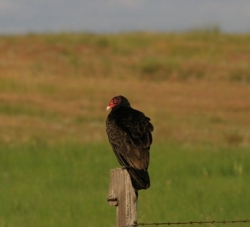 Permission was obtained from both the Canadian and American banding offices, in Ottawa and Laurel, Maryland, to place patagial tags on nestling Turkey Vultures as they near maturity, when their wingspan is five feet or more. Marten Stoffel leads the project. Nature Saskatchewan is now the only organization accredited to tag Turkey Vultures in Canada. With support from SaskPower a satellite radio was applied to one nestling Turkey Vulture in August 2004, and used to track it on its southward journey to its wintering site, and northward journey in the spring until the last signal was received in July 2005. The ARGOS satellite "fixes" told the position of the vulture at least 2 times per day, and were sent by e-mail every 48 hours. The satellite radio was turned on for 24 hours then turned off for 10 hours, and was solar-assisted to recharge the batteries while flying.