The Flora of Saskatchewan Association Inc. (FOSA) is an initiative by local botanists whose goal is to publish the first Flora of Saskatchewan. The Flora is based on current nomenclature and systematics, will include all known native and naturalized species in the province, and will provide a complete taxonomic treatment for each taxon. Our intention is to make Saskatchewan botany accessible to a wider audience and to make the process of studying plants easier and more productive by including detailed line drawings, morphological explanations, and glossaries.

The Flora of Saskatchewan project was started in 2003 by a volunteer group of Saskatchewan botanists, and the non-profit Flora of Saskatchewan Association Inc. (FOSA) was formed in January 2004. The current Board of Directors consists of Mary Vetter, Colin Ladyka, Sarah Vinge-Mazer, Hugo Cota-Sanchez, Steve Porter, Beryl Wait, Melissa Ranalli, Sheila Lamont, Val Harris, and Andrew Stewart. Membership is open to anyone interested in the project.

Support from the botanical community for this project is above and beyond any other previous effort. With the support of sponsors and the hard work of many volunteers, the project has already made tremendous progress. Four sections are published as fascicles, with a fifth underway. 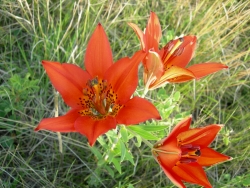