Canada’s native grasslands are among the most endangered biomes on the planet. It is estimated that less than 14% of native grasslands in Saskatchewan remain. The health of these lands are of critical importance. They support many plants and animals, including at least 30 species at risk, they store carbon and protect our land from the effects of climate change and they contribute directly to the economy and livelihoods of local people.

Starting in 2010, the Government of Saskatchewan took steps to remove protection and conservation management from hundreds of thousands of acres of Crown lands in the south where we can ill afford to lose an acre. 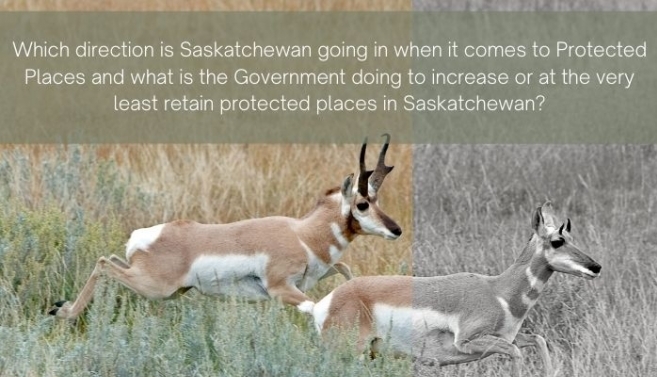 In 1992, Saskatchewan signed on to the “Statement of Commitment to Complete Canada’s Network of Protected areas” and at that time 12% was set as the target for protecting a percentage of each province’s total area. The intention was to protect that percentage of our forests, grasslands, and wetlands, to ensure representation of the full range of the province’s biodiversity. Then in October 2010, Parties to the Convention on Biological Diversity adopted a package of important measures including the Strategic Plan for Biodiversity 2011-2020 and its Aichi Biodiversity Targets to help address this urgent issue. In response, Canada’s federal, provincial and territorial governments released the 2020 Biodiversity Goals and Targets for Canada in 2015 which included a target to ensure protection of at least 17% of terrestrial areas and inland water and 10% of marine and coastal areas. These targets have since been revised to 25% by 2025 and 30% by 2030 (25x25 and 30x30). At the federal level, all political parties have committed to these new targets.

When other Governments (International, Federal and Provincial/Territorial) updated their own goals and targets Saskatchewan did not. Saskatchewan not only continues to fall behind other provinces and territories when it comes to official protected places, the province is now making backward progress. It is time for this target to be examined and updated.

Starting in 2010, the Government of Saskatchewan took steps to remove protection and conservation management from tens of thousands of acres of Crown lands in the south where we can ill afford to lose an acre. It began with an announcement that some of the land protected under the province’s Wildlife Habitat Protection Act (WHPA) would be reclassified and then removed from the act and put up for sale. Thousands of acres of WHPA public land, once protected from sale, have been removed from the Act and sold, many without conditions of protection. Land with a recognized ecological value is sold with a Crown Conservation Easement (CCE). However, fines are too low, monitoring and enforcement are not consistent and conditions of the CCE are often ignored.
Canada’s native grasslands are among the most endangered biomes on the planet. It is estimated that less than 14% of native grasslands in Saskatchewan remain.

The diversity of these lands are of critical importance. They support many species, including at least 30 species at risk, as well as directly contributing to the economy and livelihoods of local people.

Sadly, the loss of native grasslands in Saskatchewan continues. The Government of Saskatchewan has and continues to sell-off Crown lands, many acres of which hold great ecological value. It is estimated that since 2007 more than 1.5 million acres of public lands have been sold. This land – totaling an area twice the size of Prince Albert National Park – includes formerly protected grassland, wetlands, and aspen parkland that are the territories of the Cree, Saulteaux, Nakota, Dakota, Lakota, and Métis Peoples. This not only directly contributes to the loss of native prairie but violates Indigenous peoples’ inherent and treaty rights. Over time the selling of Crown grasslands leads to grassland loss. History has shown us that if the land is in any way useful to agriculture practices (i.e. not a valley slope), it will over time be broken and seeded to crops. The only private lands that have not been broken are either still owned by families who value native grassland and have resisted the financial incentives to sell or convert the land to crops OR the land is not at all suitable to growing crops. Privately owned grasslands that have any potential to grow crops are over the long term at risk, because unless they are protected with a conservation easement, the next landowner or the one after that will take advantage of the subsidies and economics that favour plowing the land to grow oil seeds or grain or lentils. With rising land prices, it has become affordable and even profitable for farmers and producers to convert native land cover and seed it to crops. And conversely larger farmers have begun to see any non-cropped land cover as a liability. These factors are driving an accelerated loss of habitat in farm country—in native grassland in the south and southwest and in aspen parkland bluffs and wetlands in central and east-central Saskatchewan.

Liquidating Crown land is permanent and irrevocable, and denies the people of Saskatchewan an opportunity to develop and implement frameworks for shared land use and governance that protect native prairie and allow for a variety of Indigenous, agricultural, and recreational land uses. This land belongs to future generations and is not the provinces to sell. As Treaty people, it is our duty to ensure that Indigenous rights are upheld, which can only be accomplished by nurturing the ecosystems and land base upon which these rights depend. First Nations MUST be meaningfully included at the table when any decisions are made regarding the tenure of Crown lands.  While the province has added protected areas in the north of the province in the past few years, there have not been any additions to the protected areas program in the prairie regions. A protected areas report the province produced in 2019 makes it clear—they have no intention to protect anything but forest that is not of interest to any mining or resource companies: “Saskatchewan State of the Environment 2019: A Focus on Forests”. When we remove protection and conservation programming from Crown lands—particularly in our grasslands ecoregions, which are already under so much pressure for development—we are in a sense robbing the future of its biodiversity.

What you can do to help

Contact the Saskatchewan Premier and your MLA and let them know that natural protected places in Saskatchewan are important to you!

Some questions you can ask: