Voices From the Field - June 23

Hello from your summer 2021 Habitat Stewardship Assistants, Rachel Ward and Carmen LaBelle! We have returned from our first trip of the summer where we were helping out the Water Security Agency (WSA) with their annual Piping Plover Census! 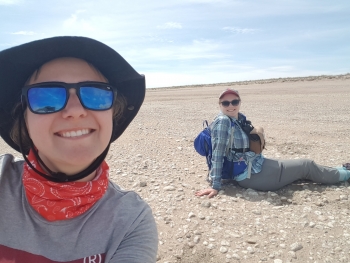 Carmen (left) and Rachel (right) taking a short break on the beach. Photo by Carmen LaBelle

Our home-base for the week was a small private campground near Elbow, called Coyote Springs Campground. We arrived the day before the census to set up our little row of tents, along with the Coordinators and a couple volunteers. From there, we set off in small search and monitoring crews to look for and track our target species, the Piping Plover. This species is endangered in Canada and migrates north to our gravelly or sandy shorelines in mid-May to lay eggs and raise their young. 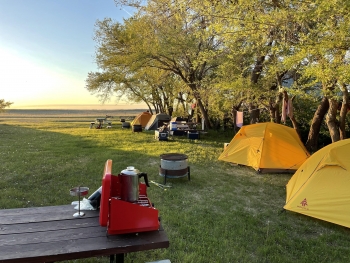 It was a privilege to learn from and help the WSA this season with their census. We were instructed how to find Piping Plovers by sight and sound while out on the beaches. They blend in much more than you might think! Often you hear them first, then have to stop and look around for them. By the end of the first day our eyes may have been a little strained from the binoculars, our feet a little tired from the walks on the beach… but our ability to spot them was increasing quickly! 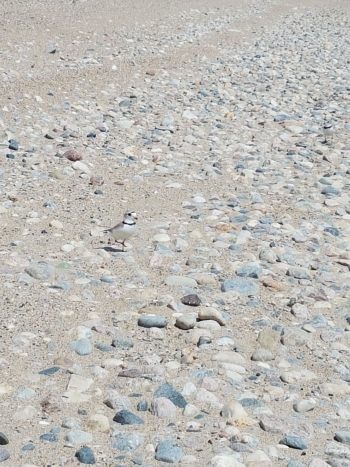 A pair of Piping Plovers. Can you see both? Photo by Rachel Ward.

For the census, we were helping to count birds in pairs or singles. This involved watching the birds for a while once they were spotted, to see if there was another plover nearby and how they interacted. We saw many pairs but also got to see some territorial displays when a single plover or one from a separate pair would wander too close to the other. We also helped the WSA to locate nests, which they will be monitoring throughout the summer to help prevent losses due to flooding and predation. The WSA also tracks nests lost due to human disturbance from activities like driving along the beaches. Due to nesting on open beaches, Piping Plover nests are very well camouflaged and can be easily driven over without the drivers noticing.

Census work, with everyone spread out the width of the beach (left). A group picture of the crew (left). Photos by Carmen LaBelle.

We saw lots of cool things in addition to the plovers over the course of the week, including some bones, a pike jaw, and lots of mare’s tail. There was a lot of wildlife around such as pelicans, many species of waterfowl, double-crested cormorants, bank swallows, many shorebirds and an osprey or two! There was even a large pike eyeing up Carmen when she was dunking our buffs in the lake to help us keep cool!

Some bones on the beach (left), a pike jaw (middle) and a couple of Mare’s tail plants (right). Photos by Rachel Ward

Along with having a great week of census work, we were able to get to know our fellow workers and enjoy a great bonding experience at the beginning of the season! From the campground we had easy access to a beach where we could enjoy wading into the lake, skipping stones and walking along the beach. Every evening the neighboring 3 deer would walk past and stand silhouetted against the sunset. Finally, we can't forget to mention our friendship with the campground donkey, Josie, who loved all our carrots, apples and scratches! 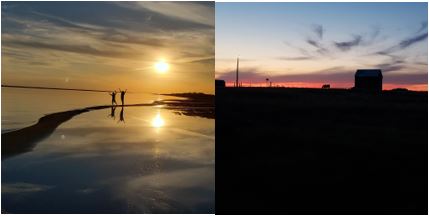 Gillian and Carmen on the beach near the campground (left). A sunset by our campsite with Josie the donkey (right). Photos by Rachel Ward.