Nature Saskatchewan's Operation Burrowing Owl (OBO) was launched in 1987 to protect Burrowing Owl habitat from cultivation, monitor population changes, and increase awareness of the owl. As of 2018, 336 landowners and land managers participate in OBO, and together are conserving nearly 162,000 acres (65,559 ha) of grassland habitat in pastures and other lands while using their land as they always have.

Landowners voluntarily agree to conserve habitat for the endangered Burrowing Owl and other prairie wildlife and annually report the number of owls on their land.

If you are one of the few landowners with Burrowing Owls nesting on your land, or if you have prairie habitat that formerly supported owls, you have an important role in their survival. Every nest site is important to their recovery. Most OBO participants no longer have nesting owls, but their role in conserving habitat is essential if we are to see a population increase of these prairie ambassadors. 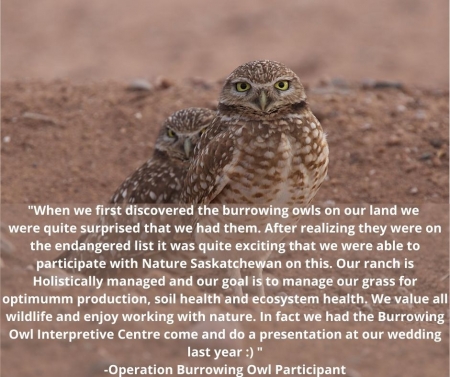 Burrowing Owl Numbers Decrease (but only slightly!) in 2018

Burrowing Owl Numbers Decrease (but only slightly!) in 2018

Where are Burrowing Owls found?

Where are Burrowing Owls Found?

The Burrowing Owl, or ground owl, was once found across the open mixed grasslands and aspen parkland. It ranged from Winnipeg in the east, to Calgary in the west and Prince Albert in the north. It has now disappeared from Manitoba and parts of Saskatchewan and Alberta. Burrowing Owls are now primarily found in the mixed grassland regions of Alberta and Saskatchewan.

How is the Burrowing Owl faring?

The Burrowing Owl was once a common summer resident of the Canadian prairies. Since 1987, the Burrowing Owl population has declined over 96%. It's estimated that between 500 and 800 owl pairs currently breed in Canada, half of these in Saskatchewan (2004 estimate). As of 2015, estimates for the owl population in Canada are as low as only 270 owls, around 100 of which are thought to breed in Saskatchewan.

The owl's decline has been attributed to changes in the prairie landscape. Over 85% of our native grassland has been cultivated and 40% of our wetlands have been lost. Grassland that remains is often heavily fragmented. Habitat change has resulted in a lower survival rate for Burrowing Owl eggs and young.

OBO appreciates and recognizes the efforts of the many stewards who conserve the remaining habitat for Burrowing Owls.

For more information on the benefits of stewardship, please visit our Stewards of Saskatchewan page