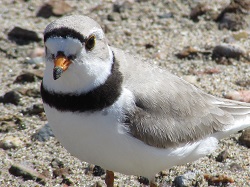 Nature Saskatchewan initiated Plovers on Shore (POS) in 2008 for landowners that manage lands and habitat that is important to the survival of the endangered Piping Plover. As of 2018, 64 public and private landowners and land managers participate in Plovers on Shore (POS), and together are conserving approximately 138 miles (222 km) of nesting and foraging shoreline habitat for the endangered Piping Plover (Charadrius melodus circumcinctus).

The Piping Plover is a small migratory shorebird that, on the prairies, nests and feeds on sandy and gravelly beaches of freshwater lakes and alkaline water basins. The program works with landowners and land managers to raise awareness and to protect Piping Plover habitat from destruction. Voluntary habitat conservation includes maintaining (not draining) wetlands, discouraging livestock use of shorelines/wetlands during the breeding season, and not breaking surrounding prairie lands, while landowners use the land as they always have.

If you are a Saskatchewan landowner with Piping Plover habitat, you play an important role in this species’ survival. Every available nesting site is important to the plover's population and its recovery.

Where are Piping Plovers Found?

The Piping Plover nests at three distinct locations: the Atlantic coast, the Great Lakes (Michigan and Superior) and the Northern Great Plains. In the Northern Great Plains of Saskatchewan, plovers can be found breeding on the shorelines of Lake Diefenbaker, Reed Lake, Old Wives Lake, Chaplin Lake, Lake of the Rivers, Willow Bunch Lake, the Quill Lakes, Manitou Lake and numerous small basins during the summer. They migrate to Saskatchewan in late April or early May from the Atlantic coast and the Gulf of Mexico, and will stay in Saskatchewan until early August. 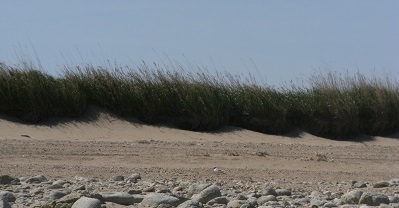 How is the Piping Plover Faring?

In 1985, the Committee on the Status of Endangered Wildlife in Canada (COSEWIC) listed the Piping Plover as endangered. There has been immense recovery effort and much research done over the years to determine and undertake actions that can increase the plover population.

What does the Piping Plover need?

Piping Plovers inhabit sparsely vegetated sandy and gravelly beaches and alkali mud flats of freshwater and alkali lakes. They feed along the shoreline eating freshwater invertebrates and create a nest by scraping out a shallow bowl in the sand/gravel and line it with pebbles.

For more information on the benefits of stewardship, please visit our Stewards of Saskatchewan page

For more information please see the Plovers on Shore Brochure.